Welcome to the work of astrologer and author Edith Hathaway. Her articles and commentary on Vedic astrology have appeared in numerous journals and magazines around the world, and some of her lectures are now available on mp3s and MP4s with accompanying PDFs. 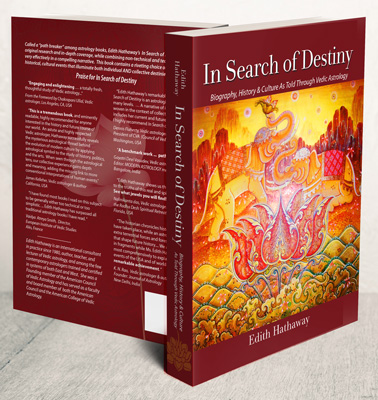 In Search of Destiny – Edith Hathaway

Her most recent book, In Search of Destiny: Biography, History & Culture As Told Through Vedic Astrology was published in April 2012 and is available on Amazon.

For several years In Search of Destiny remained first among the top three “Top-rated” books at Amazon.com Kindle books on Eastern Astrology.  It has also received several awards, along with its author. Reviewers describe the book as “ground-breaking,”  “a monumental work,”  “a significant contribution to Vedic astrology,” and “an astrological sensation on many levels.”

Read some of the additional Reviews & Testimonials.

Peruse some excerpts from the book – each one followed by a 2015 update with the author’s commentary on related topics applicable to current events, including the 2016 U.S. Presidential Election. (These appeared in the Sept., Oct. and Nov. 2015 issues of Astrologic magazine, an on-line magazine.)

INTERVIEWS:  Please also see coverage of Edith Hathaway in her interviews with Jyotish Star, Oct. 2012  and with the Washington State Astrology Association, May 2011.

Deepen your learning experience in Vedic astrology with one or more of the 18 products in Edith’s Web store. With the addition of three new video presentations from FAC 2019 and  UAC 2018, there are now four video presentations (mp4s). The Power Point lecture presentation is combined closely with the audio for your convenience.  No other venue offers these lectures in the mp4 format. The lecture handout is also included in PDF format in most cases and available to download.  Enjoy! 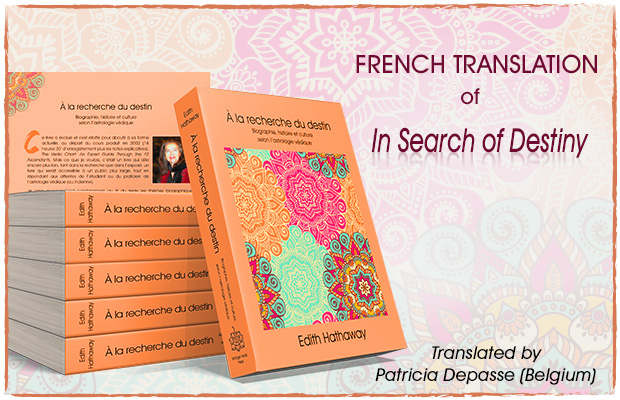 A French translation of In Search of Destiny is now available (as of Feb. 2018) on Amazon worldwide and in selected bookstores across Europe and in Canada. The book is published by Vintage Vedic Press, San Diego, translated by Patricia Depasse (Belgium):  À la recherche du destin : Biographie, histoire et culture selon l’astrologie védique. (612 pp.)

DEEP STATE vs. HEAD OF STATE

Most people were not aware there even was a Deep State until Donald J. Trump entered the political arena in 2015 as a presidential candidate. Then over the next few years we knew for sure that not only was there a Deep State but that Globalists were aligned with it.  Their worst enemy was a strong nation-state and anyone promoting that reality, along with citizens’ rights protected by a strong constitution.  The United States is a major target.

Never before in American history has a presidential candidate been spied on with illegal electronic surveillance, as was done from 2015 (or earlier) through 2017 to then-candidate Donald Trump, later President-elect Trump, then President Trump, for 10 months into his presidency. The Obama Dept. of Justice planned and executed this scheme, working closely with the FBI, CIA, NSA, the Clinton campaign, and the Democratic National Committee (DNC).  “They framed an incoming president with a false Russian conspiracy that never existed, and they knew it, and they plotted to ruin him as a candidate and then plotted to destroy him as a president.” (Former federal prosecutor Joe DiGenova, Jan. 2018)  Here is Joe DiGenova  in Jan. 2020 updating what was known for several years, including that efforts to impeach Donald Trump began when he was still a candidate.

From March to Nov. 2017, with follow-up articles  in 2018 and in June 2019, Edith has been writing about these events from the vantage point of transiting Pluto tightly opposite the USA natal Sun, also examining the Jupiter-Saturn and lunar nodal cycles, 2000-2020.  In a national chart the Sun symbolizes the President and presidency. Pluto represents secret forces, unwilling to be seen or identified; and an opposition is a confrontation or attack, in this case a systematic and full force attack, but the players remain hidden – until now.

(Index of all articles with links is available here)

As of  Jan. 1, 2023 there are 980 pages of articles (from WORD files) available at this website: 72 articles including three book excerpts with commentary. Many of these (21 articles) also appear in French translation by Patricia Depasse, Belgium.

In Jan. 2023 Edith offers two new articles, one on Jupiter Dasha: A Study in Contrasts, and more topically, and article about the Revelations of Saturn’s Last Passage Thru Capricorn.

In June 2022 Edith presents another look into the fight for election integrity with a story on Catherine  Engelbrecht, founder of True the Vote. In March 2022, Edith continues on with The Canada Story, featuring the confrontation between the Freedom Convoy and the Trudeau government.  In Feb. 2022, Edith has two articles published, one is on the Canadian Freedom Convoy: All Eyes on Canada; and an earlier one covers the upcoming 30-day Planetary War between Venus and Mars, a fairly rare phenomenon to be so lengthy.  In Dec. 2021 Edith contributes an article on the trial of United States v. Ghislaine Maxwell. Aug. 2021 Edith features two articles, Freedom vs. Tyranny and the California Gubernatorial Recall Election.  The Recall Election occurs on Sept. 14, 2021. In June 2021 Edith discusses British politician and political commentator Nigel Farage, then on a U.S. speaking tour.  In May 2021 Edith focuses on U.S. Election Integrity, with material on the Arizona forensic audit plus Mike Lindell.  Earlier in the year, in Feb. 2021 Edith writes about the 2021 U.S. Inauguration and its Aftermath, while previously, on Dec. 1, 2020 she she offers History Hangs in the Balance.    In Nov. 2020 Edith presents material on journalist Glenn Greenwald and his challenge to mainstream media censorship.  In Sept. 2020 Edith writes about the rise of Marxism and Postmodernism in the U.S. and elsewhere, and specifically how it is impacting the U.S. and the Nov. 2020 U.S. Presidential Election. A subsequent two-part article focuses on the 2020 U.S. Presidential Election and in the many ways it can be seen as a Contemporary Morality Play. All the Sept. 2020 articles feature material on the upcoming Jupiter-Saturn conjunction.

In late March and April 2020 Edith covers the Coronavirus.  The first article is Coronavirus – War Against “the Invisible Enemy.” The second one is Coronavirus – The Bigger Picture & Time-Lines.  Previously, in late Jan. 2020 she covers Prime Minister Boris Johnson and Brexit, which finally became official Jan. 31, 2020. In late 2019 her articles cover the astrological events of Dec. 2019,  including a Solar eclipse; also the upcoming Jupiter-Saturn conjunction in Dec. 2020, with its implications of the outcome of the 2020 U.S. Presidential Election. A broad swath of time is covered in analyzing the larger  and smaller JU-SA Conjunction cycles through the centuries leading up to this one.

Among topics of cultural interest, Edith has written on the musical Hamilton, its chief protagonist Alexander Hamilton and its creator Lin-Manuel Miranda.  The show’s World premiere was Jan. 20, 2015.  She has also written on another noteworthy cultural event: a breakthrough concert Feb. 12, 1924 at which George Gershwin’s Rhapsody in Blue received its World premiere.

Among topics of political interest, Edith has covered a range of issues on Immigration in her two-part article about this defining issue of the 2020 U.S. Election (Aug. 2019).  She has covered the Origins of the Trump-Russia Collusion Investigation (June 2019), Jussie Smollett – Hate Crime Hoax in Chicago (Feb. 2019), and Jussie Smollett – Act 2 (April 2019), which also discusses the final report by Robert Mueller on the Trump-Russia collusion. Among other topics are the U.S.-China Trade War & Related Topics (Dec. 2018), including the hot topics of immigration and the Supreme Court nomination of Brett Kavanaugh (Oct. 2018).  Her Aug. 2018 article focuses on Peter Strzok, the lead FBI investigator who is also discussed in her July 2018 article on the Inspector General’s Report (June 2018), titled More Investigation around the 2016 U.S. Election.   Edith has written on The Information Age and where its new technologies are leading us.  Closely related to this is her article Deep State vs. Head of State, as well as one on the new Citizen Journalists.  On Aug. 31, 2017 she published The Great Divide: American Civil War Redux, and in Nov.  2017 came Anatomy of a Pluto Station: Las Vegas Shooting and Other Notable Events.  There are 9 articles closely related to each other, including via the tr. Pluto Stations occurring twice in 2017 and once in 2018 (Sept. 30) opposite the USA Sun. (See TRENDING box above.)

Edward Snowden’s revelations in June 2013 about massive global surveillance operations were preceded by whistleblowers William Binney, Thomas Drake and others since 2005. But not until June 2013 did most people pay attention. Edith’s two-part article (available here as PDF) was originally published in the Dec. 2014 and Jan. 2015 issues of Astrologic magazine, an on-line magazine, and later republished with illustrations and follow-up commentary March 2016 in the spring 2016 issue of Geocosmic Journal, a professional astrological journal of the NCGR (National Council of Astrological Research).

Edith will give a webinar sponsored by the Metropolitan Atlanta Astrological Society on Thurs. Oct. 21, 2021. The meeting opens at 7 pm and the lecture is from 7:15 to 9 pm Eastern time. The topic is The Power of the Ascendant Chart.  MAAS members may attend for free.  Non-members may participate for a $18 fee payable at the MAAS website.

May 24-29, 2018:  Edith was selected by the NCGR (National Council for Geocosmic Research) to give two 75 min. lectures at the United Astrology Conference (UAC 2018). It was held May 23-30, 2018 at the Downtown Chicago Marriott Hotel on the “Magnificent Mile,” Chicago, Illinois. The largest and most important of the international astrology conferences, it was sponsored by five astrology organizations: AFAN, ISAR and NCGR, and their junior partners ACVA and AFA.  Speakers were selected from a large pool of astrologers who are members of the various organizations.  Edith’s lectures were given on Friday, May 25, 2018,  and Monday, May 28, 2018. Her Friday lecture “Identifying Revolutionary Trends” was on the Political & Mundane track.  Her Monday lecture “Mysteries of the Vedic Dasha System” was on the Vedic astrology track.  Audio files of Edith’s UAC2018 lectures are available at this website (web store) in mp4 format, with audio combined with the original Power Point presentation.

May 12, 2017:  Edith lectured as Guest Speaker at the San Diego Astrological Society.  Her topic was “Mysteries of the Vedic Dasha System.”  The San Diego Astrological Society meets once a month at the Joyce Beers Community Center, 3900 Vermont St., San Diego, CA 92103. The meeting starts at 7:30 pm and her 90 minute presentation began at 8:00 pm.  For more information, please see http://sandiegoastrology.com/events/

Edith appeared as lecturer and panelist at the ISAR conference Oct. 13-17, 2016 in Costa Mesa, CA, titled “The Power of Forecasting Meets the Consequence of Choice“ – held at the Hilton Orange County Hotel in Costa Mesa, CA. The entire schedule can be viewed at the ISAR’s 2016 symposium website. http://www.isarastrology.org/2016-conference. ISAR (International Society for Astrological Research) coordinated the Vedic astrology track with ACVA (American College of Vedic Astrology).

There are many forces of destiny for us to understand, and Vedic astrology – the astrology of India – gives us one tool. It is a great gift in revealing who we are, and where we are in time. The next task is accepting and working with those factors. Knowing this and accepting this, we move on to pursuing the destiny we were meant to live, at the highest level – as manifestations of the planetary lights, the brightest of which are the Sun and the Moon. Their light is reflected in each of us.

Read more about the “real essence” of astrology:

“Time is the force behind the Creation of the universal elements. It is also the force that brings about the Destruction of all these. Even when the Universe is Asleep, Time remains in a state of Awakening. Time, which is thus ever alert, is an Inviolable Force. … Time bakes the various living beings along with their souls.”  From “The Concept of Time,” Hora Ratnam, Chapter 2, slokas 327-328, p. 309.