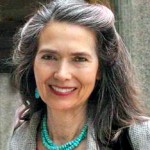 Edith Hathaway is an international consultant in practice since 1980, author, teacher, and lecturer of Vedic astrology, and among the few contemporary astrologers trained and certified in systems of both East and West. She holds the Level IV certification as Consulting Astrologer from the National Council of Geocosmic Research (1989), Master Astro*Carto*Grapher certification from Jim Lewis (1988), Jyotish Kovid from the Indian Council of Astrological Sciences (1996), and CVA Jyotish Visharda and CVA Jyotish Kovid from the (American) Council of Vedic Astrology (2010). In 2012 CVA conferred on her the title of Jyotish Brihaspati, its highest title; and in 2013 she received the Jyotisha Mahasagara title from the Raman & Rajeswari Research Foundation, Bangalore, India. 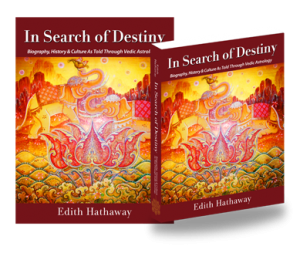 She was a Founding member of the American Council of Vedic Astrology (1993) and since 1992 she has served as a faculty and board member of both the American Council and the American College of Vedic Astrology. Her Audio course on the Vedic Ascendant charts was produced in 2002 and re-released in 2015 on mp3s with accompanying PDFs and updates. Her previous book (Navigating by the Stars, 1991) was on Western tropical astrology, and her latest book (In Search of Destiny, 2012) is on Vedic astrology.

In Search of Destiny is a winner in the category of Nonfiction E-book from Eric Hoffer Book Awards, who in May 2013 announced the winners for books published in 2012.  See: http://hofferaward.com/  Established in 2001 “as a means of opening a door to writing of significant merit… [it] honors the memory of the great American philosopher Eric Hoffer [1902-1983] by highlighting salient writing, as well as the independent spirit of small publishers.” Hoffer Book Awards are covered in The U.S. Review of Books, where In Search of Destiny is cited as “[bringing] an understanding of the astrological science via explanation and examination wrought through the lens of time and culture.”

The French translation of In Search of Destiny was published in Feb. 2018 by Vintage Vedic Press, San Diego: A la recherche du destin : Biographie, histoire, culture selon l’astrologie védique.  The translator is Patricia Depasse, who has previously translated 21 full-length articles by the author.  See her bio and translations:  https://edithhathaway.com/articles/french-translations/