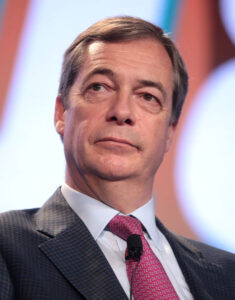 Known as “Mr. Brexit,” Nigel Farage is the one person in the UK who symbolizes the decades-long fight of UK citizens aiming to gain independence from the Globalist tyranny of the European Union.  Initially there seemed so little hope that his goals would reach fruition that he was dubbed “the patron saint of lost causes.”  He was vastly outnumbered, especially by establishment politicians and the mainstream media, notably the BBC.  They all said Globalism is here to stay, so get used to it and stop questioning the inevitable, including unlimited mass migration.  Nation-states must learn to be subservient to the New World Order and the Great Reset. END_OF_DOCUMENT_TOKEN_TO_BE_REPLACED